About the Mishima Yukio
Literary Museum 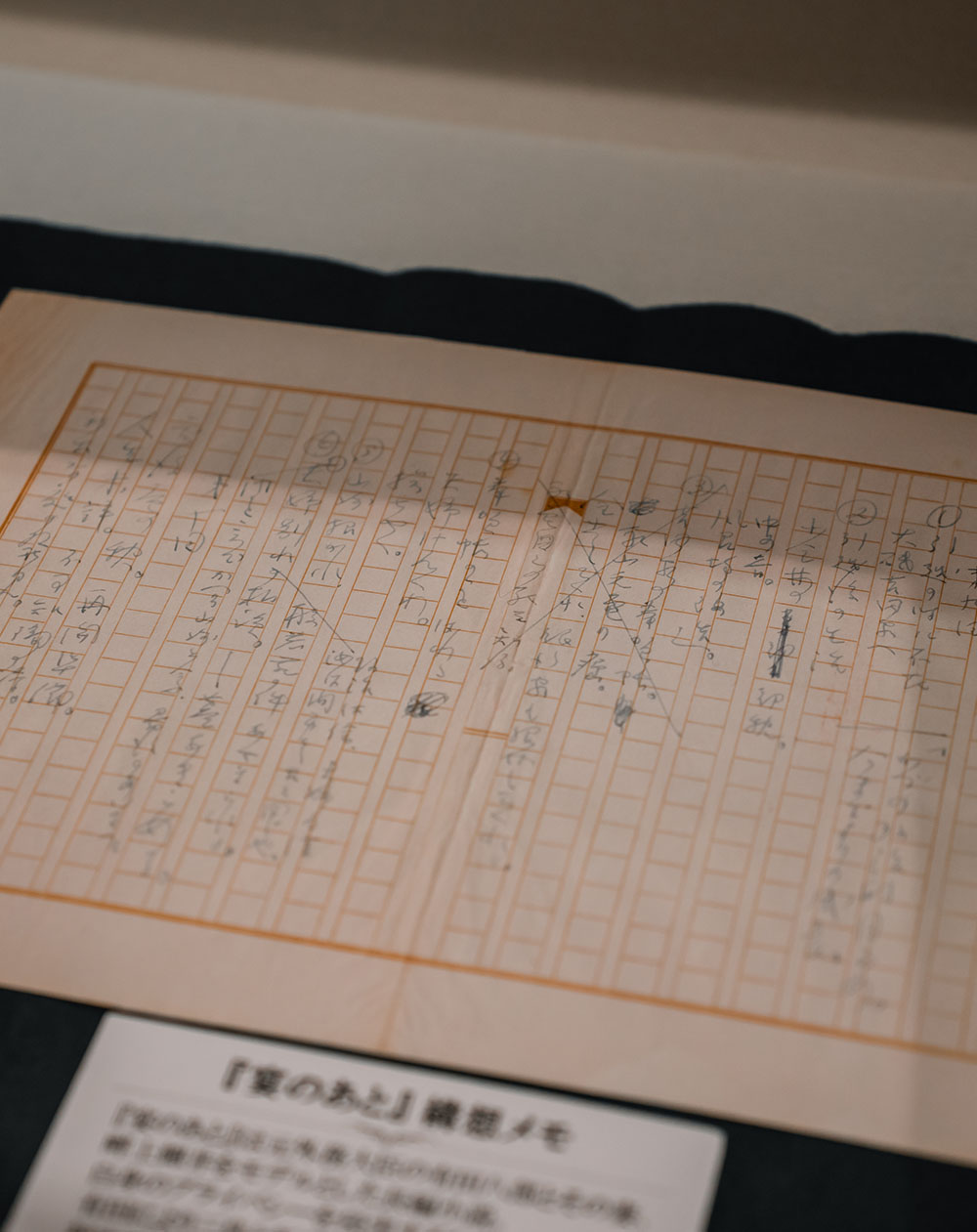 Mishima Yukio and his works still fascinate the world.

The museum opened in July 1999 on the shores of Lake Yamanaka, which appears in several works by Mishima Yukio. The exterior and courtyard are inspired by Mishima’s residence in Tokyo, with exhibition rooms on the first floor and a reading room on the second floor.

The collection includes more than 20,000 items, including hand-written manuscripts of Mishima’s masterpieces such as Confessions of a Mask, The Sound of Waves, and The Temple of the Golden Pavilion, creative and research notebooks, letters, paintings, photographs, clothing, materials related to films and plays based on his works （scripts, posters, props, etc.）, books, research papers, and translation materials.

Two special videos that can only be seen in the museum are “Mishima Yukio, one of the World’s Greatest Writers” which introduces the world view of Mishima Yukio and his works, and “The Passion of a Great Man of Letters Breathing in the Silent Forest,” in which stage director Miyamoto Amon talks about the appeal of Mishima.

Mishima Yukio was born in Tokyo in 1925. His full age coincides with the number of years in the Showa era, symbolizing that he was one of Japan’s leading writers of the Showa era. At the same time, Mishima was one of the earliest modern Japanese literary figures to be active on the world stage. In any language area or culture, you can find Mishima-mania.

Mishima had a double nature in that he was the most national and the most international at the same time. Moreover, he respected the classical order while also radically disrupting that order, and he was a creator of refined beauty while also indulging in low vulgarity. Thus, depending on the position of the reader or viewer, a myriad of sometimes mutually contradictory faces of Mishima emerges.

The Mishima Yukio Literary Museum houses and exhibits not only related publications and video materials, but also many of Mishima’s own hand-written materials such as drafts and creative notebooks. We hope you will find your own Mishima in the myriad of Mishima Yukios through access to these valuable materials. 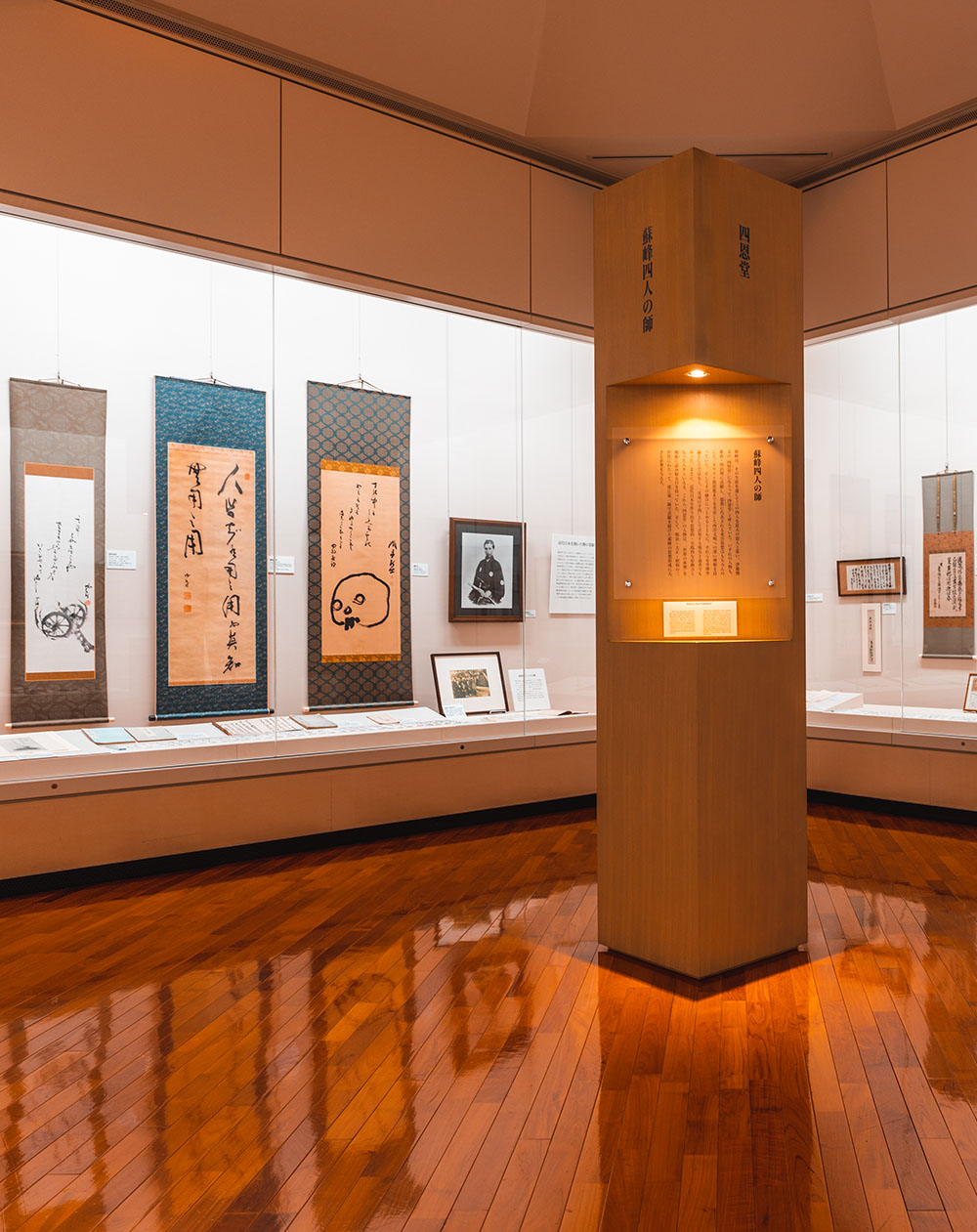 One of the largest in the country.

Sohō had a second house by Lake Yamanaka. He was a literati who led public opinion in modern Japan. His younger brother was the writer Tokutomi Roka. The museum opened in July 1998 near the place where his house was. In addition to hand-written manuscripts of his masterpieces such as A History of the Japanese People in the Modern Era, the museum exhibits materials of political and financial figures, writers, and painters who were close to him, including Yokoi Shōnan, Niijima Jō, Katsu Kaishū, Itō Hirobumi, Matsukata Masayoshi, Yosano Akiko, and many others.

Sohō is deeply connected to the village of Yamanakako, as evidenced by the fact that the name of the area “Asahigaoka （Rising Sun Hill）” and the “Hōko-sai”（a fireworks display held annually on August 1 at Lake Yamanaka） were named by him. The film “Tokutomi Sohō, Standard-Bearer of Modern Japan,” an easy-to-understand summary of Sohō's life and achievements, is a must-see.

Tokutomi Sohō was born in Kumamoto in 1863. His real name was Tokutomi Iichirō. He was a giant in the field of journalism who started Kokumin no tomo, a forerunner of the intellectual general-interest magazine （also the magazine in which Mori Ōgai’s “Maihime” appeared） and Kokumin Shimbun （one of the predecessors of the current Tokyo Shimbun）. He was also known as a great debater who lived through the Meiji, Taishō, and Shōwa periods.

The highlight is A National History of Japan in Modern Times, a 100-volume work that chronicles the history of Japan from the Oda-Toyotomi period, the Tokugawa period, and the end of the Edo period under Emperor Kōmei, to the Seinan Sensō （the Satsuma Rebellion, the Civil War of the Meiji era）. He started this project after the death of Emperor Meiji, and wrote every day for 34 years from 1918 when he was 55 years old, no matter what happened, amounting to 240,000 pages of manuscript paper.

Ideologically, he changed drastically: before the Meiji Restoration, he was an advocate of the exclusionary Sonnō Jōi （Revere the emperor, expel the barbarians） policy, but in 1876 he was baptized, followed by his advocacy of the Freedom and People’s Rights Movement. After the Sino-Japanese War, when Japan was subjected to the Triple Intervention by Russia, Germany and France, which demanded the return of the Liaodong Peninsula to the Qing Dynasty, he developed his own nationalistic stance. However, he was consistent in his pursuit of what Japan should be in the world, and his life is nothing but a testament to the fact that he lived whole-heartedly through the reality of a history filled with contradictions.

This is a common ticket for both the Mishima Yukio Literary Museum and the Tokutomi Sohō Museum.

*Students of high school age and above must present their student ID card. If you do not present your student ID, the general admission fee will apply.

Visitors who meet the following conditions will receive a discount on the admission fee （discounts cannot be used in conjunction with each other）.